We are fully available during the Covid-19 outbreak.
Cart is Empty
Your cart is empty.
View Cart
Checkout
My Account
LoginSign Up
English
USD  $

Here we focus on what may be the least forgiving bracelet in watch repair: mesh. Its popularity is growing, however, repairing and sizing mesh requires careful trimming. 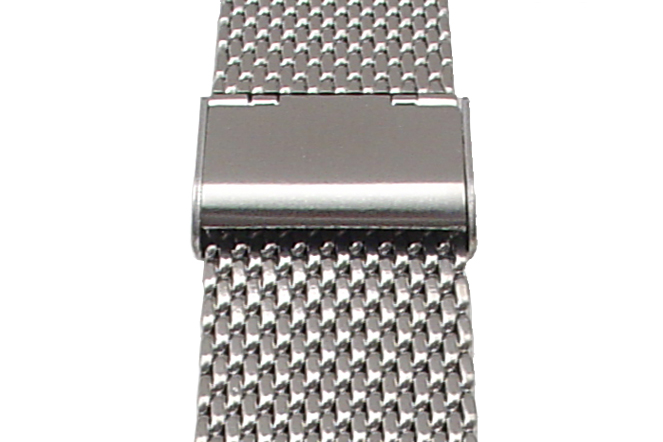 Unless the band is of the expansion mesh type, which is limited to a few manufacturers, chances are you'll need to trim the length of a mesh bracelet. Without links to remove, the unwanted length must be cut off. Once removed, it can't be replaced.

To shorten mesh bands, remove one end of the band from the watch case. Wrap the watch and band around your wrist, overlapping the clasp and the end of the band. Mark the band at the point where the inside of the clamp rests. Take care not to mark where the outside of the clasp rests on the band, which would result in a band too long for the wrist.

Two methods are commonly used to cut mesh bands. First, using a flexible shaft machine with a separating disc, grind through the band where needed. This offers the cleanest cut.

Use nippers if the machine isn't available. It cuts quickly but can crush the ends of the band. These ends will need to be trimmed square with a file or a separating disc. Ask materials suppliers about the type of nippers best suited to your strength (some are easier to use than others) and typical repair requirements.

Try cutting a small bit at a time until you reach the most comfortable length for your wrist.

After the ends are cut to the correct length and then trimmed square, reinsert them into the clasp. Position it so the serrated clamp bites the grooves on the underside of the band. Remember to replace the clasp so the safety chain ends up on the same side of the watch as the crown.

"I write regularly on the watch forum TURF. I am very happy with every transaction I have had with you. Particularly the Rios Ardillon Pusher. I..."
Tim Nicolai
"You people have been excellent for your customer service and great products. When part of my order was lost (or taken) you sent replacements..."
Larry Stuff
"My new watch band arrived and I couldn't be happier with it!! Many many thanks to you. Your site doesn't have a testimonial page but if you should..."
Clinton Jackson
more...